Back in the day before industrialized agriculture, a much wider variety of plant foods were grown. Today most produce crops you find in the grocery store are grown in monoculture farms in order to maximize production efficiencies as well as visual and size consistency. There are a pint full of criteria for what constitutes being an heirloom; one being open-pollinated. Open-pollinated plants either self-pollinate (so lonely) or are pollinated by the plants next door. If the plants next door are of the same cultivar, this kind of open pollination results in baby plants that are identical to their parents. These are considered to “breed true”, which is quite romantic.

Other definitions require an age of the cultivars, say 100 years, and another requires the origin to be before 1945, when widespread use of hybrids began. Then there are purists that define heirlooms as seeds that have been handed down over generations.

We liken the heirloom tomato to your great, great aunt Matilda’s china – unique but precious. And so, we bring you Black Cherry Tomatoes, which aren’t so much black as very, very dark red. They are compared to wine with complex and rich flavors. Eat up! 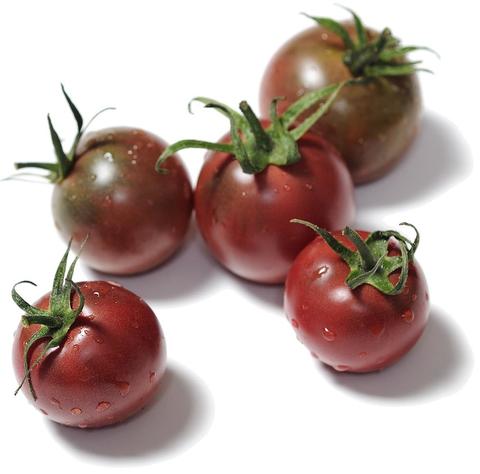 This small variety of tomato has been cultivated since the early 19th century. Try roasting them whole (some will pop and splatter) until caramelized, then put on top of a cracker, puff pastry, bread. Whatever!